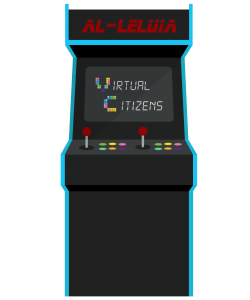 A video game focused side project of the Virtual Citizens Podcast, Al-leluia presents the gaming gospel according to Virtual Citizens Contributor & Game Commentary Producer Alastair Dennehy. In each episode, Alastair and his panel of guests plug into video game culture, and the communities that thrive in its space. From the co-operative couch to the competitive kumite, Al-leluia is where Citizens play – No tokens required!

On this week’s Virtual Citizens, the gang’s resident video game Vizier, Alastair Dennehy, stages a BLOODY COUP and has taken over to talk, at full length, about video games for an entire VC episode! Brought along for the ride are semi-contributor Barry “Ironic Snap” Neenan and ACTUAL DESIGNER OF AN ACTUAL GAME Ciaran Monaghan.

This episode’s topic is on mental health and how’s it’s addressed in video games. From it’s treatment as health bars to more considerate and thoughtful depictions, we make our way to games that outright address and tackle mental illness and video games may be pioneering an interactive path to breaking the taboos we have around the topic of mental health.

A slight warning: towards the end of the podcast, a rather heavy conversation about depression occurs so listener’s discretion is advised.

Episode 3 – Bringing Back Gaming’s Past