Well, that’s less preamble than usual. Let’s keep this brief. The sooner I lay out this article, the sooner I can stop thinking about sexual harassment.

In case you missed my description of it way back, Boku no Hero Academia is a manga/anime about a society of superhumans. 80% of people have at least some kind of superpower, leading to constant supervillain attacks and a superhero bureaucracy to deal with them. (Think One Punch Man, but considerably more optimistic.) We follow Izuku Midoriya, hero name ‘Deku’, a teenager studying how to be a hero at a prestigious school.

Most of this cast is 15 years old. If the superhero school was Irish, they would be preparing for their Junior Cert. This is something I need you to remember.

Boku no Hero Academia, like its similar shonen anime predecessors such as Bleach, just fuckin loves making characters. The show is bursting at the seams with heroes and villains, and while not every design can be a winner, a big part of BnHA’s success is that audiences love its characters too.

Except Mineta. Few (if any?) Western fans like Mineta, and many outright despise him. And this is for very good reason.

Minoru Mineta is a member of Class 1-A, somehow, despite having a garbage superpower and worse heroic instincts. To describe him succinctly: remember Disney comic relief characters? They’re not quite in vogue any more – Frozen’s Olaf was the last unambiguous example – but in the Nineties they were a scourge. No matter how interesting the actual protagonists and villains were, sometimes the camera would painfully drag over to the hero’s idiot friend, and the audience would be captives until the next unfunny joke had come and gone.

I want you to picture that, except the unfunny joke is a rape joke. The gargoyles from The Hunchback of Notre Dame, but they’re incels. If your soul just lurched briefly from its moorings, you now know how the audience of this show feels on a constant basis.

Which brings me back to Mineta.

Much of Mineta’s scenes are pedestrian in their awfulness. He attempts to see the female students naked. He enters a girl’s room and immediately tries to smell her underwear. In the aftermath of a fight, he outright gropes a classmate. That thing you aren’t hearing? That’s the sound of thousands of people not laughing, sitting in stilted silence, during these moments of hilarious comedy gold.

Sexual harassment is more than enough to ruin a fun vibe by itself. But there’s nothing else to Mineta – sexual harassment is the only trick he has, like the world’s worst magician. His power – throwing small, sticky balls – is not interesting or visually appealing. He lacks a personality beyond his lust, and what we do see paints him as exactly the kind of shallow, nasty person one would expect. Imagine how less fun Pokémon would’ve been if Brock’s thirst for women was a) 1000% stronger and b) his only character trait. That would not be someone you want to go on an indefinite camping trip with.

Even on a structural level, the jokes are not strictly ‘jokes’. If I may use Ninja Sex Party as a brief counterexample, their jokes, both lyrical and visual, have comedic structure. Danny Sexbang is very overconfident, then suffers for it. It’s an intuitive comedic rhythm – sex is just the dance that rhythm is played for.

Mineta is not an overblown character like Danny Sexbang. If anything, he’s a worryingly accurate rendition of a 15 year old boy with more hormones than morals, which doesn’t make for fun viewing. But it goes even further. Mineta touches a female student inappropriately. The show pauses for laughter. That’s not a joke in any theoretical sense, it’s just something the show expects its audience to find inherently amusing. There’s no artistry to appreciate here, no inventive framing to politely smile at even if the content is off-colour. It’s just sexual assault framed as funny.

But what pushed these “jokes” past a thing I hate to a thing I could wrangle a (hateful) article out of is how the show seems to have a faltering, ineffective self-awareness about Mineta. It wants to have its underage cheesecake and eat it too.

I’d like to break down a specific scene. The class travels to a training camp, and in typical anime fashion, there’s a hotspring. In typical worst-character fashion, Mineta attempts to scale a wall in order to see the female students bathing. Though they fail to stop him, there are protests from some of his male peers. Other, genuinely heroic characters are capable of recognizing this is a disturbing act.

But this is ancillary compared to what happens when Mineta gets to the top. His view is blocked by Kota, a young boy working at the camp, who locks eyes with him and intones,

“In order to become a hero, you must first become a human.”

After delivering one of the most poignant lines I have ever heard, let alone from a superhero anime, Kota fells Mineta with a single strike, protecting the female students. The show has demonstrated what is and is not a heroic action here. And then it happily dumps any feminist brownie points it just earned by then immediately showing the bathing girls anyway.

Moments like these exemplify Mineta’s uneasy space in the story. It feels like the creators are acknowledging that, no, nonconsensual incel fuckery is in fact neither cool nor nice. But Mineta is not treated as a villain. He’s barely treated as a nuisance. The show only half-heartedly condemns him, while at other points glorifying his behaviour. This story sharply interrogates the motives behind altruism and why people seek to be heroes, but explicitly states “I want to become famous so I can touch a boob” is a valid answer.

Yes, explicitly. There’s a bit where it seems like Mineta will fail a test because his conviction isn’t strong enough, but he wants to touch a boob so badly he heroically powers through. The longer I talk about this the more tempting supervillainy sounds.

The usual caveat is to just wave a hand and say “Oh, it’s a cultural thing, what can you do?” But thanks to popularity polls run by Shonen Jump magazine, it is an empirical fact that Japanese audiences also do not like Mineta. As BnHA continues to introduce more and more characters, Mineta’s overall place in the rankings sinks further and further down.

Perhaps Japanese viewers do not muster the same uncomfortable revulsion as Western fans, but there certainly doesn’t seem to be an equal and opposite ‘Mineta Defence Squad’ to counterbalance those who create entire blogs dedicated to their hatred. On the fanfiction site Archive of Our Own, 293 stories proudly bear the tag “Alternate Universe – Mineta Minoru Doesn’t Exist”, while “Shinsou Hitoshi Replaces Mineta Minoru” boasts 227. On roughly 40 stories, the authors list Mineta as pursuing a romantic relationship with such paramours as “No-one”, “Pepper Spray”, “Getting chopped up by a helicopter”, and, most popularly, “Death”. These reactions can be ugly or amusing or both, but ultimately, few are unjustified. The creators made this character, and they decided to include him in the final draft. There’s a lot of talk these days about unreasonable fandom behaviour, but this strikes me simply as fans reacting to what they’re given.

The nature and content of Mineta’s jokes are, cultural subjectivities notwithstanding, abhorrent. From a writing perspective, this is sharply worsened by his utter lack of other traits. Watching the show with others, I can physically feel the room get a little colder every time he opens his mouth. The vibe of the show is thrown off. With no redeeming qualities, or even a decent power, Mineta is a perfect example of a character who never should’ve gotten past an editor.

I suppose the lesson here is that, no matter what you’re writing, beware the impulse to brush off anything as ‘just’ a joke. We treat comedy as this breezy, inconsequential thing, but it is no more or less important than any other element. You’ll see similarly wonky results by waving off other scenes as ‘just’ action, or ‘just’ exposition, or ‘just’ character-driven drama. They are all part of a greater whole. There is a right and wrong way to do all of it, and Mineta demonstrates several flavours of wrong. And because he is part of the story – not some inconsequential sideshow, but a member of Class 1-A just like anyone else – he cannot simply be brushed off.

There’s nothing ‘just’ about him. In any sense of the word.

thanks for listening to me complain about an anime character, here’s a meme 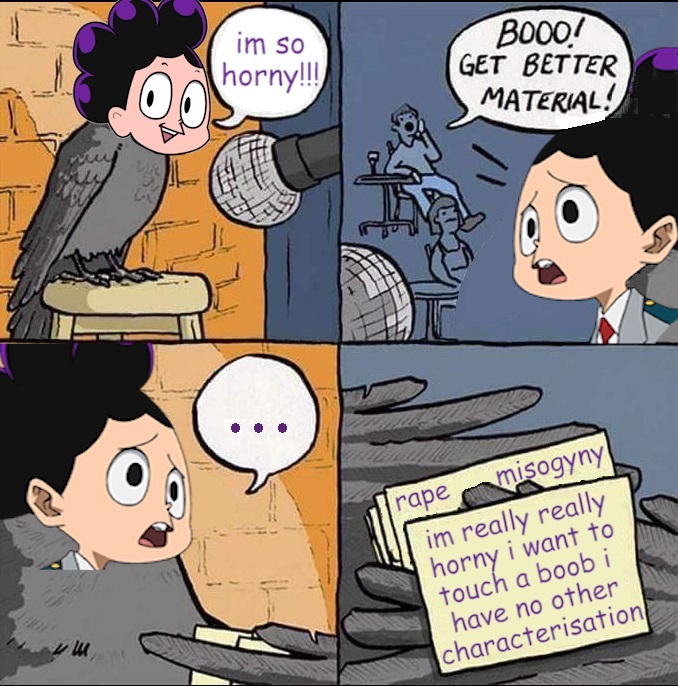