After a mere [checks Wikipedia] twenty – twenty?! good god – feature length-films, the Marvel Cinematic Universe has gone where it never has before; Woman Town. Population: A Woman.

Yes, following fifteen films about white dudes, two films about a literally very colorful band of misfits but mostly Chris Pratt, one film with Evangeline Lilly in the title but mostly about Paul Rudd, the similarly long-awaited Black Panther, and one film about a stupid purple idiot, it is at last time for Marvel to put one of its many powerful heroines firmly in the spotlight. What are the results?

I’d like to say this was as excellent as Black Panther, but in all honesty, it’s not quite on that level. There’s only one major flaw with Captain Marvel, but tragically, it’s a big one. Even more tragically, it’s gonna be real hard for me to put into words.

Okay. So. Y’know how Iron Man is so graceful in how he flies and shoots dudes with his palm-lasers? Or how Spiderman has those nifty finger gestures as his webshooters go thwip-thwip? Or how Captain America can throw his shield and miss but it bounces off three separate walls and whacks the back of a guy’s head?

I’ve long believed that what truly sells the Marvel films, on an immediate level, is their high-quality sense of kinaesthetics. Major characters have distinct, memorable ways of moving. Hell, you’ve doubtlessly forgotten Crossbones’ brief appearance at the start of Civil War. But I remember his cool punch-gauntlets that he locked into place with a fistpump. That kind of visual identity is very important.

Captain Marvel kind of falters in this wordless ‘oomph’ department. The actual motions and colours are very good, but the action itself lacks that spark that you feel in your gut. I would’ve said this was a highly personal thing, except I’ve confirmed with other viewers they also felt it was missing.

Again, it’s hard to (verbally) explore this, and what might have went wrong. It might be the fact that the action mostly involves aliens of dubious durability. Brutal stuff happens to a character, and then within a minute they’re up and swinging again. It’s hard to mentally gauge how hard the hits are.

So that’s the major shortcoming. What are the good parts? Pretty much everything else, honestly.

We open on a poorly-lit shootout between aliens, but before long we have transitioned to Earth… of the year 1995. (A fine year for babies.) The recreation of the nineties aesthetic is equal parts hilarious and impressive, to say nothing of the frankly sorcerous good looks of Samuel L. Jackson. Was that even computers? Is he just like that?

Dubious immortality notwithstanding, Jackson is a huge part of what makes the film work. After several appearances as the grumpy and paranoid Director of SHIELD, it’s refreshing to see him with his (proverbial) hair down as a younger, breezier agent. The dynamic between Fury and our heroine is wonderful. Their friendship grows believably, partly because they eschew the deadpan patter so many films and shows reproduce. When one says something funny, the other laughs. That might sound like a small thing, but it goes so far in making both characters seem real.

Despite their closeness, however, the film does not nail Fury into place as The Love Interest. Jude Law’s alien mentor, despite an early scene of where Carol wakes him up to spar, is also not The Love Interest. The Love Interest, in a very real and practical way, is Maria Rambeau (Lashana Lynch), Carol’s best friend and co-pilot. The bond between them is strong and palpable, with Carol serving as an ‘aunt’ to Maria’s child. Whether you interpret two women raising a child together as Just Gals Being Pals, or that they’re lesbians, Harold, the fact remains that this is new ground for the frequently stilted and forced heterosexual romances in these movies. Worth celebrating either way.

I’d also like to praise the depiction of the Skrulls. The classic alien shapeshifters have been well-realized on the big screen. I won’t go too much into detail on it, but suffice to say I definitely appreciate the direction taken.

On a final, but vital, note: over the past eleven years, there has been a long-running tendency to name the funniest character concept in each successive film ‘the best character in the MCU’. Tony’s arm-robot Dummy. The Guardians of the Galaxy’s greatest foe, Taserface. The lovable rockman revolutionary with the Kiwi accent, Korg.

But all that said, 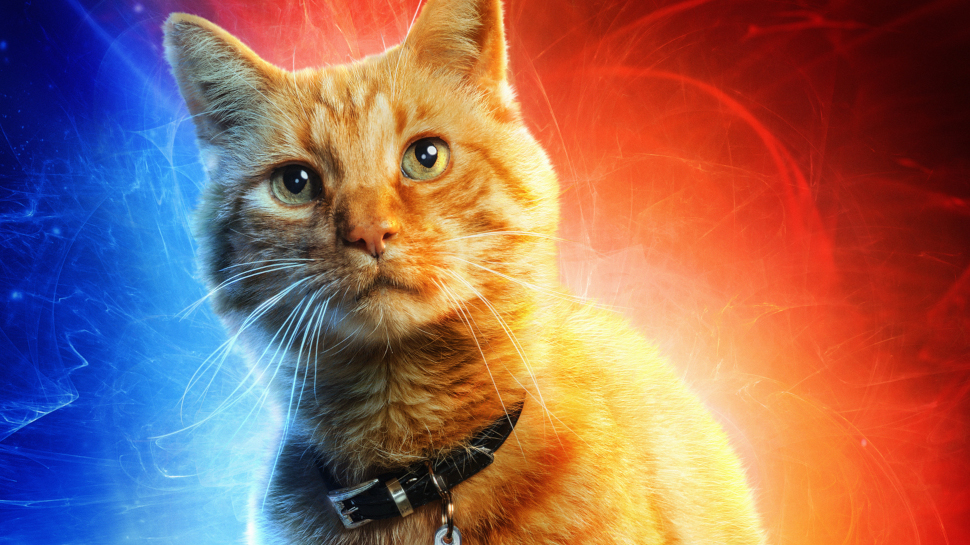 the best character in the MCU.