The last day of 2018 saw a breaking point for Diamond Days. Steven and Co carry out their plan to hold a ball in the hope of getting the Diamonds to talk out their issues and end their reign of terror. This brings the conflict between the Diamonds and the Crystal Gems to the forefront, which is exciting and something of a relief.

As I’ve discussed before at length, the problem with this arc so far is that it was unclear whether the show was letting the Diamonds off lightly. It seems that the story was just playing its cards close to its chest. Steven may have been able to ignore Blue and Yellow’s terrible personalities for a little while but diving right into aristocratic Homeworld conventions means coming face-to-face with everything wrong with the society. (I don’t want to beat a dead horse here but it’s the whole point of the story, so I want to give credit for good handling of a sensitive topic.)

Previously, Blue has seemed a tragic, sympathetic figure stricken with grief for her dead sister. None of that has gone away but it suddenly becomes impossible to ignore her aggressive manner, especially when it’s rooted in bigotry: “Does that call herself a Garnet?” At one point, she enters the frame and, within seconds, swipes Steven across the room with one hand. So, this is someone who’s content to physically intimidate anyone she considers below her, even if they’re an ally. Hardly a Christmas card candidate.

Before this episode, it was hard to say whether the story was leading toward an awkward manifestation of the show’s pacifist ethos. Obviously, this wasn’t going to be a finale to the whole show. But, I did express concern last week that if Steven threw a party and convinced the Diamonds to stop doing colonialism and just hug it out, that would be a weird political message. It connects to the recent discussion about ‘hopepunk,’ a vague concept which some people are unconvincingly proposing as a new genre of fiction. The ensuing discourse was a muddle on all sides, but a common consensus was that the world cannot be saved through niceness alone. Steven Universe, as a children’s cartoon that likes redemption and has fascist villains, has always been susceptible to that pratfall, so it’s great to see it not fall in face-first.

Organising the ball uncovers Homeworld’s value system. This is a neat compromise between fairy-tale aesthetics and real-world systems (not that the two never had anything to do with one another before). Essentially, it’s Fun versus Conformity. The latter is paired with the oppressors because it’s about the Diamonds as authorities enforcing the social mores. ‘Fun’ here is presented as doing what you like to do because you like to do it, which is as reasonable a definition as any other. Where things get more interesting is that something as obviously positive as fun is linked directly to oppressed groups. Pearl and Connie are treated as property, Amethyst is made to wear limb enhancers because she’s unacceptably defective, and Garnet is forced to un-fuse. All this obvious capital-O Oppression is shown to be conceptually the same as that picture of the robot with the ‘No Fun Allowed’ sign. It’s a neat and clear way of communicating big ideas to little kids. 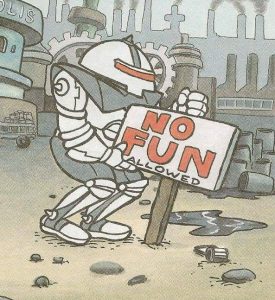 If all this sounds a bit obvious, that’s because, to be fair, it is in parts. Most of it is done with the show’s usual level of wit. “Just call me Steven,” he says, to which Blue and Yellow Pearl respond in unison, “Whatever you command, Pink Diamond.” But, there’s at least one part where it all goes a bit Lion King 2 (“What is fuuuuun?”). Your mileage may vary.

Interestingly, this episode also functions as a rejection of respectability politics. Those familiar with LGBT+ issues will know that there has been an unfortunate trend of excluding various groups (trans people, people of colour, etc.) in favour of presenting a front of cis white middle-class gays. (Is there a word for this? If not, I’ll suggest ‘stonewalling.’) There’s a little ring of this to Garnet saying, “she’s not gonna listen to me but she might listen to Pink.” When I first heard this line, I thought Garnet was being a bit hard on herself. But, the tactic doesn’t make the problem disappear. This shows that pushing some types of people to one side in the ongoing work isn’t right or even sustainable. It also shows that Garnet gets a much harder time than Steven; as Patrick Carland writes in his essay about pinkwashing, “simply by being openly who they are, in the eyes of society, LGBT people are in-themselves social and political statements.”

Eagle-eyed viewers will have caught that this episode’s title is a mirror of the Season 1 episode ‘Alone Together,’ wherein Steven and Connie met for the first time. When I saw this title, I figured that it would be an episode focused on the two, that it would maybe even put them in a bubble together again and probably make them kiss. Instead, this doesn’t really put Connie in centre stage. But, she does play an important role. When things seem to have altogether fallen apart, Connie encourages Steven to loosen up and have fun. Given the whole conflict between value systems outlined above, the significance of that is obvious. What’s also interesting is that it shows how different she is from the Connie we saw way back in ‘Alone Together,’ a much more anxious beast that contrasted with Steven’s over-indulgent goofiness. Now, although the episode doesn’t draw too much attention to it, the tables have turned.

Connie has another quick but important beat when Blue Diamond refers to her as Steven’s pet. This is obviously, immediately uncomfortable, but in a way that the show manages to carry off; it’s a deliberate invocation of real-world racial history rather than Sideshow Bobbing into some racism rakes. Of course, you’d want to look up the perspectives of POC critics about this, but my instinct is that it’s good to work in real-world bigotry rather than just sticking to fantasy racism against different kinds of gems. It also bolsters the critique of respectability politics; it’s always good to have a range of perspectives shown and the episode does a great job of efficiently jumping through several perspectives. You could even view Amethyst being called “deformed” and forced to wear limb enhancers as an allegory for ableism if you wanted to.

Before I finish, quick aside about the music at the ball: it sounds like Danny Elfman’s Charlie and the Chocolate Factory mode or the soundtrack for Yoshi’s New Island. That is to say, it’s weird and scary, like a chorus of demented Pee Wee Hermans. But, unlike all those comparisons, it works in context and exercises some artful restraint.

I liked this episode a great deal. We have, of course, seen Homeworld before, but this felt more of a piece with ‘Off Colours,’ just in a different part of the society. It did a lot of work to clearly communicate weighty ideas about society and politics in a visual language that kids can understand. The efficiency with which it communicates itself is outstanding in parts. Such good thematic writing during a high-stakes Homeworld run-around is wonderful to see. It feels like after too long waiting, we’ve finally hit a big payoff. This sort of thing is why I watch Steven Universe in the first place – and that’s some of the highest praise you can give any episode.

Mark Laherty writes about media and politics on his WordPress blog. You can also support him on Patreon.